Let's NOT repeat this situation

I have had some scary moments in my life.  The top ones involve the kids.  But this one is definitely ranking up there.....at least cracking into the top 5.


*For the record, while we currently have a foot of powdery snow, we will NOT be getting the 30 inches that were forecasted...or at least not where I am.  However, Boston is getting pummeled...and that is what was supposed to be here in CT*   ETA, 11:30am.  Boy was I wrong!!!!  I thought it was about a foot....closer to 2 feet!!!!  I had the kids help in the beginning, but it was very cold, and I didn't want them out for too long.  Plus...as much as I love them....I just wanted to get it done, and this was not the time for the teachable moment.  Please enjoy some snow pics before getting to the REAL story in this post.  :) 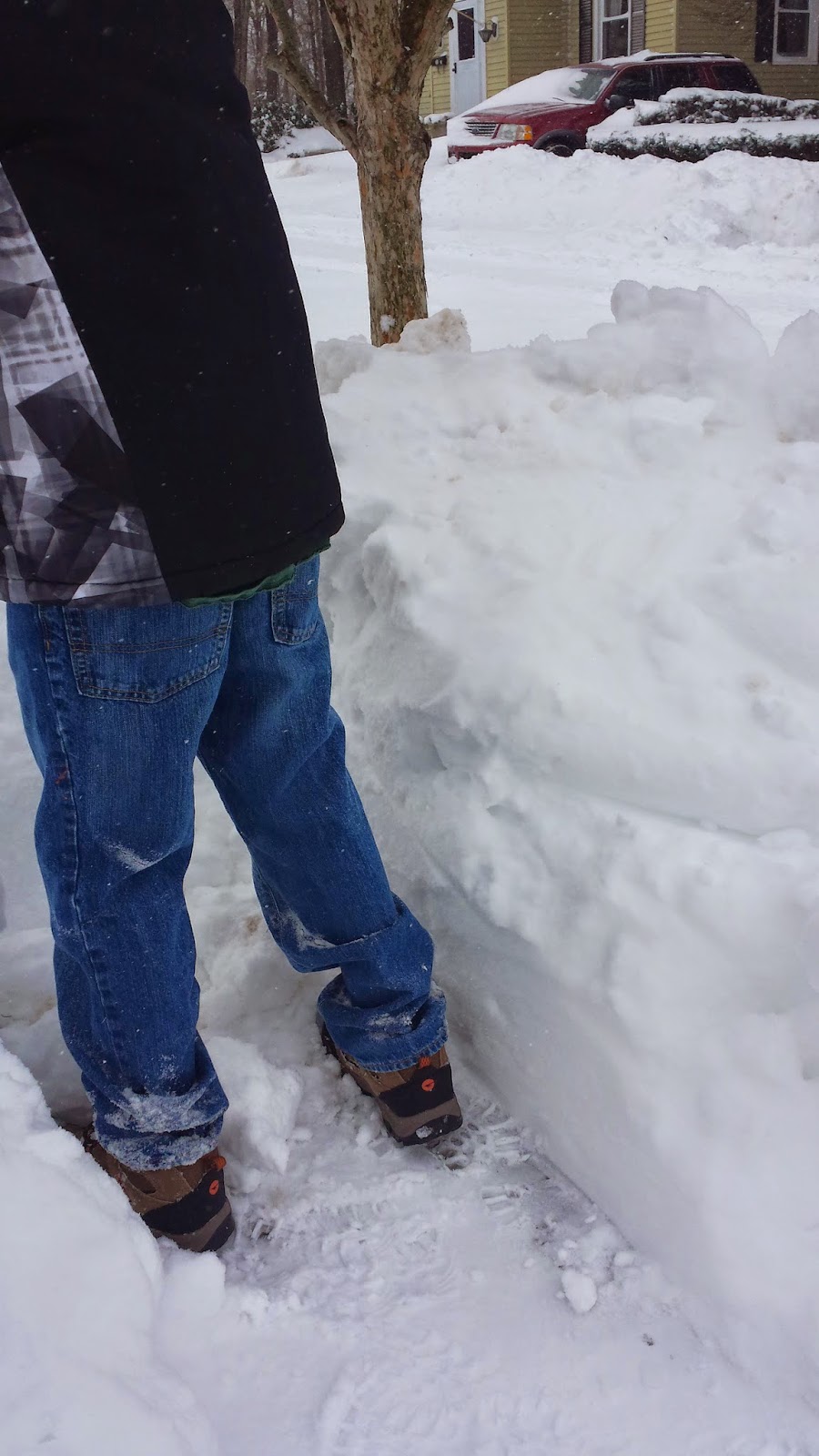 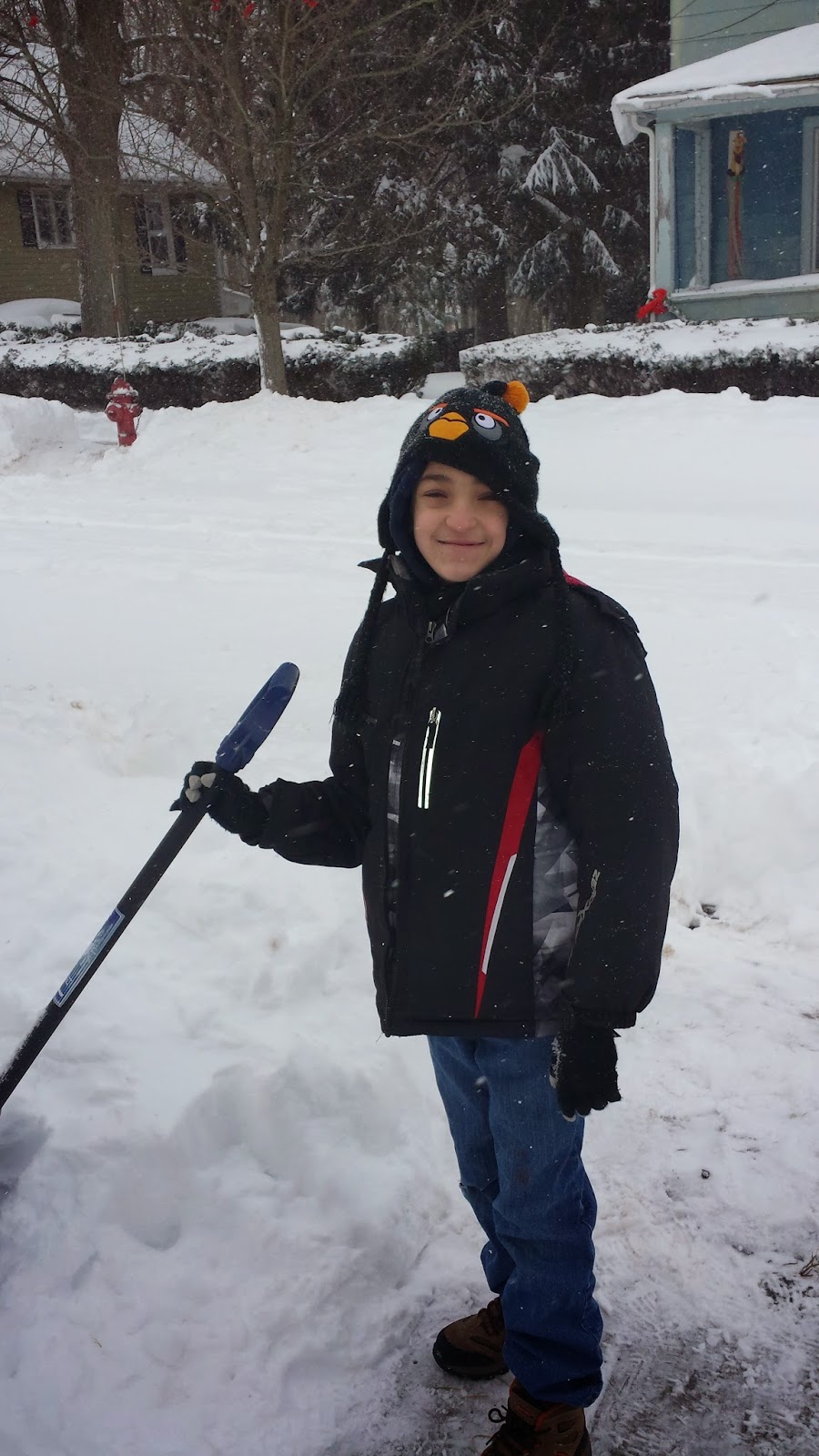 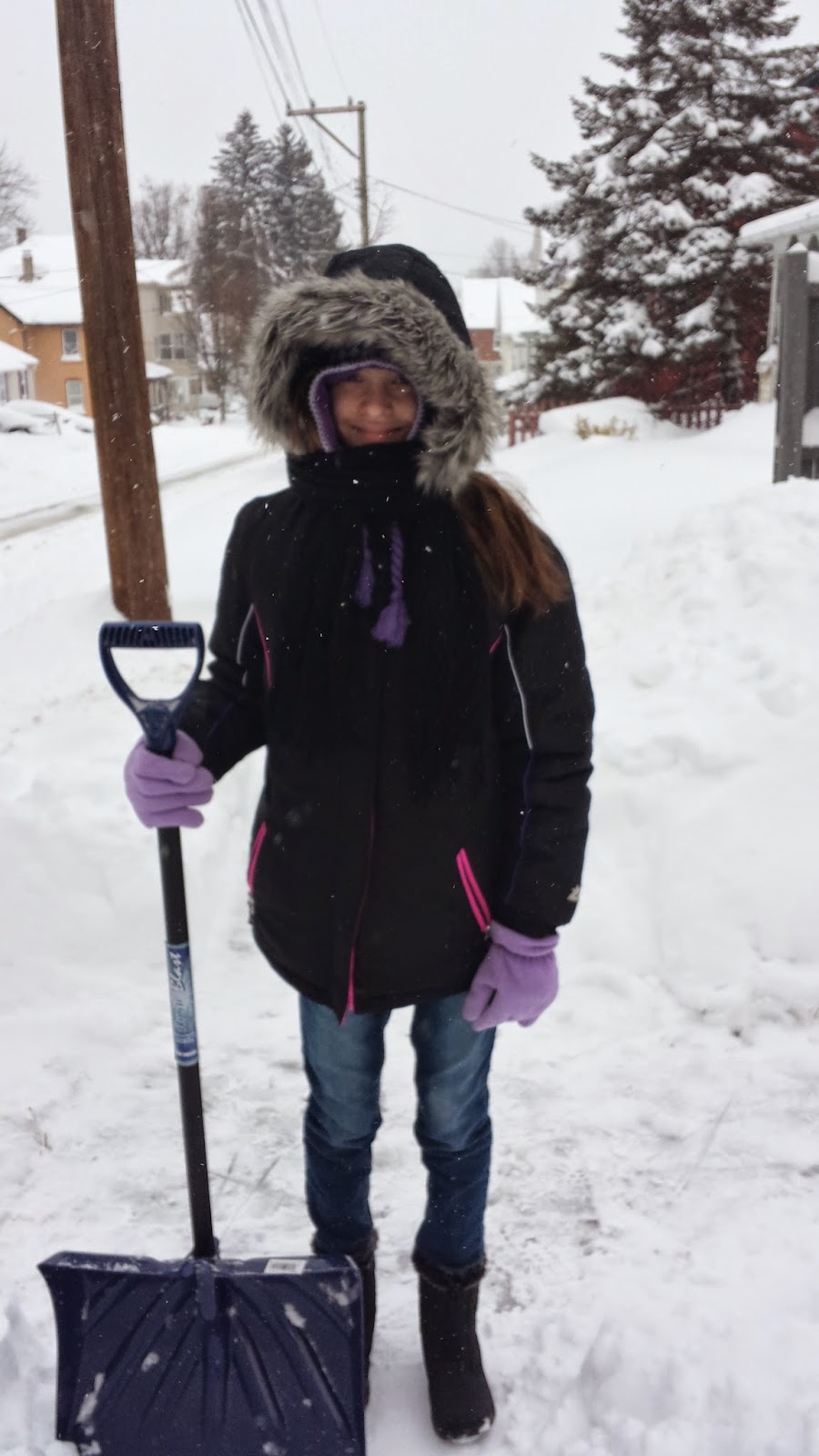 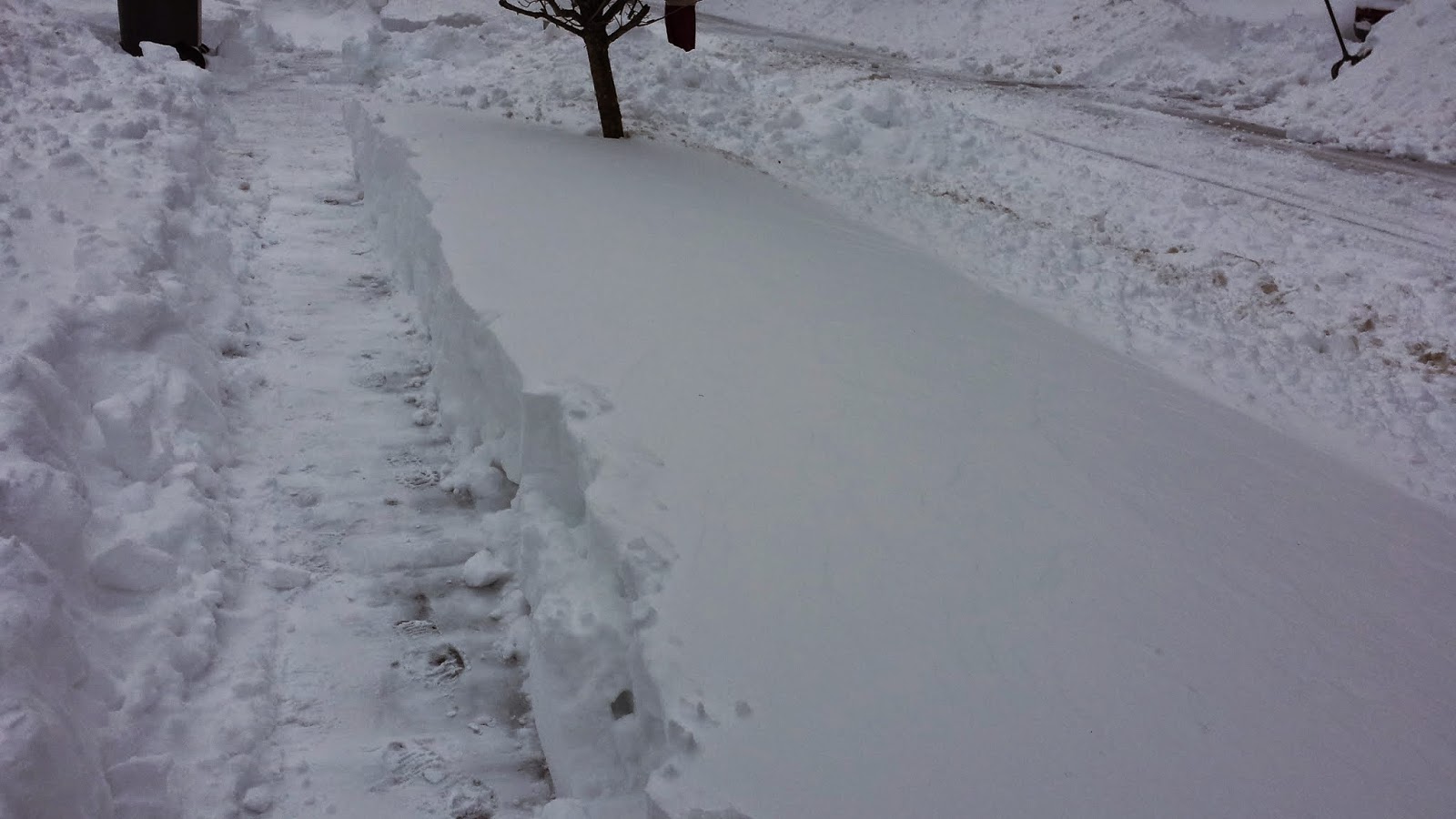 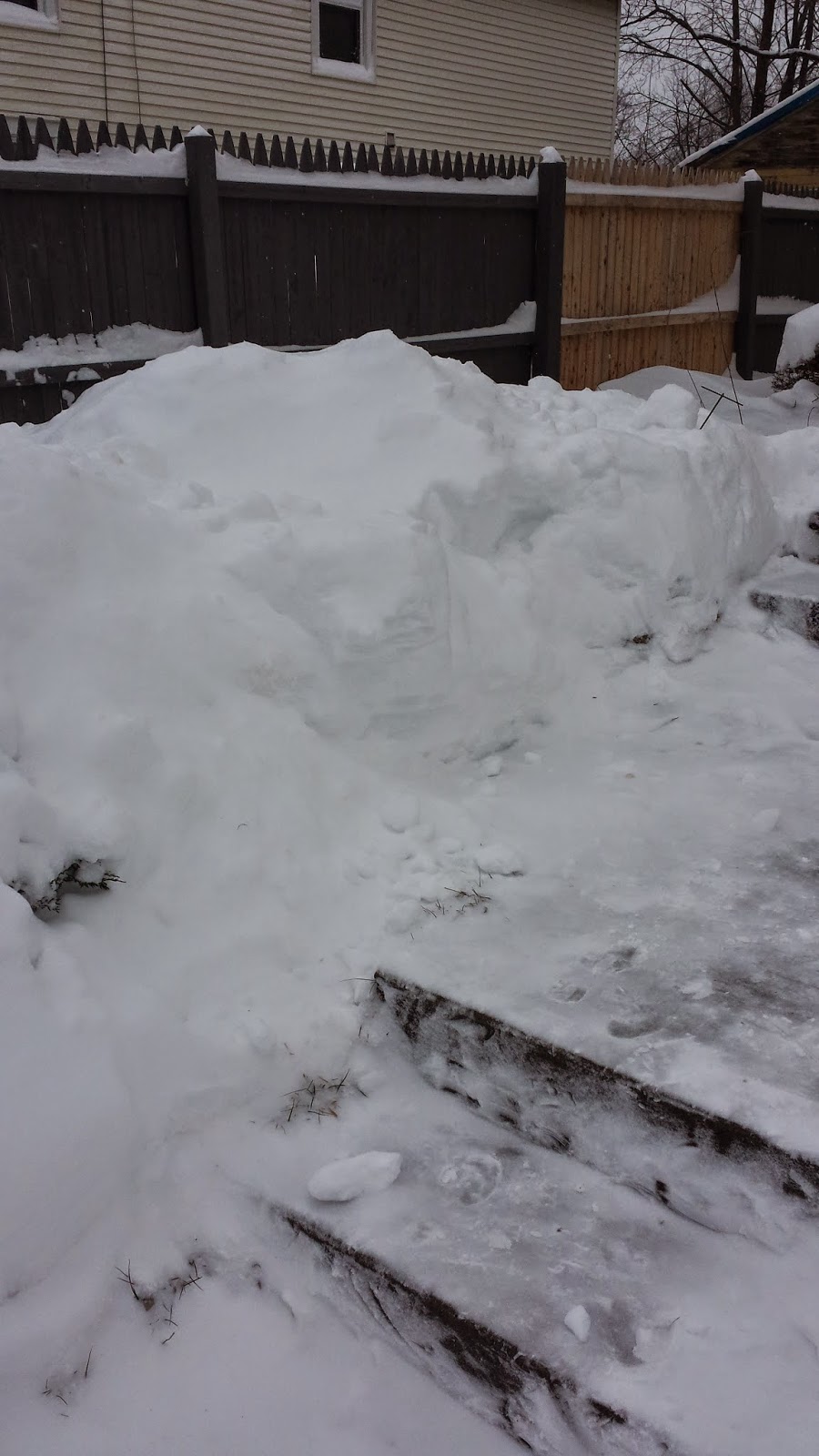 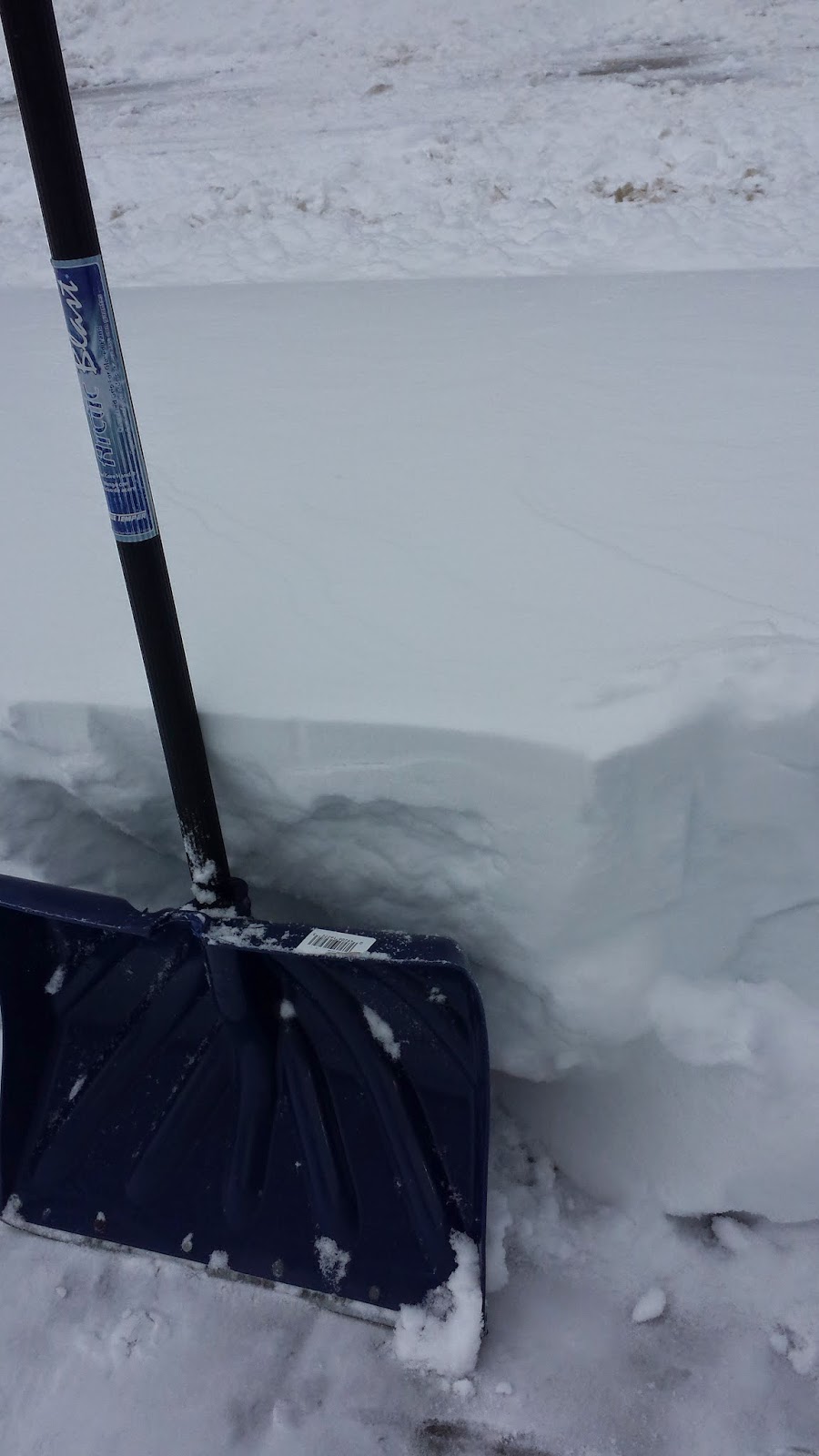 #Snowmeggedon2015 started about Noon on Monday, but wasn't sticking yet.  I left the office at 3:30 with a box of work (office had already closed for Tuesday, as did school).  I stopped at a nearby shopping center....picked up cat food and a puzzle for the kids.  Headed home.  I was going to make chicken and potatoes and green beans for dinner.  Planned on doing some work so that I wasn't as busy on Tuesday since I had to shovel out as well.

I was about half way home, on a major highway....traffic was slowing down because the snow was falling much heavier by then and was starting to stick.  Plus it was WINDY.  All of a sudden....I hear THUD. THUD thud THUD thud.

Aw crap.  What the heck is wrong with my car?????  Since it was rhythmic, I thought maybe I rolled over something and had a flat tire.  I was on the far left side of the 4 lane highway with no shoulder....made my way across to the other side where there was a shoulder.

Looked at the tires....they looked fine.  I called G-man, and he told me to check the lug nuts.  Well, then I couldn't find the tire kit.  He googled it, and I now know that is is screwed under my back seat.  So I am hanging out of the car, upside down, unscrewing the tire kit.

Checked all the tires....they were fine.  Not dragging anything.  Nothing looked out of place.  By this point it is getting dark, and snow is really blowing.  I decided to limp the car home, and would deal with it there.  Except.....

Now the car won't start.  Seriously.  It started just fine at the office....after my errands....and now it is dead.

I am sitting on the side of a major road....in a snow storm (albeit still early in the storm, but my car was covered in snow by this point)....with a dead car.

Deep breath.  I don't have AAA (but that is changing this week!) but we do have roadside assistance through our car insurance.  Tried calling them....all circuits are busy.  OF COURSE THEY ARE.  I try again a few minutes later.....get them on the phone....and......The state police pull up to tell me I can't park on the side of the road.

Roadside assistance tells me it will be 1.5-2 hrs to get someone to tow the car.  Police say that isn't acceptable and they will call a tow truck which will respond faster.  OK...what choice do I have.  Luckily, the tow truck came quickly....

Except he can't tow my car where I want it to go (15 min away, near my house).  He can take it to his shop that is at the next exit on the highway.  We passed several other disabled cars in just that short distance, so he had to go get them next.  So he dropped me off at a Dunkin' Donuts on the corner and took my car.

I am walk into Dunkin' Donuts with a paper ream box with my work, cat food, and my purse (I left the puzzle in the car.  *sad* ).  I had been on the phone with my friend around the corner to see if she could get me.   She can't....she is home with her kids....and her friend's kids....and her husband is at work.

Ok...called my boss....he was the next closest in distance and he has a truck.  I felt stupid calling...but I didn't really have many options.  So he came and got me and brought me home.

I got home a little after 6pm (remember...I left 2.5 hrs before).  I fixed a frozen pizza for my kids (nothing but the finest processed food for my family!)....because my patience to now cook dinner was left on the side of the road.  And....I opened a bottle of wine.  And I drank....a bottle of wine.

Yep.  I drank a bottle of wine.  So no, I didn't do any work.  I was home....the kids were fed (not the best dinner, but it was food).....and since I wasn't going anywhere without a car in a snowstorm.....I drank a bottle of wine.  And it was delicious.  I was in warm jammies, with an awesome buzz.  I am not a drinker, and usually don't have wine...but I was given this bottle at Christmas as a gift.  I need to really thank the gift giver....

My friends all tell me someday I need to write a book....because the stories about stuff that happens to me really just can't be made up.  Not that having a broken down car is unique...but really???  Didn't I just fix the sink the other day....haven't I put in my "this wasn't part of my job description" dues for the week???

So here we are....I have to call about my car, but there is a good chance, per the tow driver, that they won't even be able to look at my car until Thursday.  I am hoping that since the storm wasn't as bad as predicted, that maybe the time line will change.  Meanwhile...I will probably have to rent a car.

ETA:  The car nightmare is turning into a whole other post....stay tuned for the next part tomorrow!

I can't complain about my car too much.  We have owned it for over 3 yrs, and the only real issue we have had was when I replaced the tires last year.  So now I have to pay the tow truck (insurance will reimburse up to $50)... get my car fixed....and possibly rent a car....

Yeah, that wasn't in the budget.

I stayed calm....I did what I had to do....but it was scary.  A broken down car when it is dark and snowy....ugh.  I was just glad I didn't have the kids with me.  Even if I did have AAA, the police wouldn't have let me wait for them, so the scenario would have still played out.  But I do want AAA now....just for the peace of mind.  Nope, that wasn't in the budget either....but I don't really care about that. It was scary...and even if I only use it one time...it will be worth it.

Well.....I guess I better get some work done before I have to shovel the snow!!!