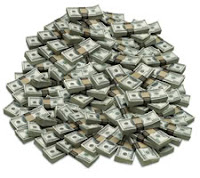 It's here! The overtime pay that G-man earned while in Boston!!

It was a horrific situation that was the catalyst to all of this, and I won't ever forget that.  We have already donated to the Boston One Fund, and G-man was part of some very personal situations that really hit him hard.  He did what he needed to do, and we are fortunate that he is in a position that allowed him to get paid for what he did.

I wish none of it had happened.  But it did, and here we are.

In total, he submitted 50.75 hrs of overtime, which includes a couple hours from a training from the very end of the previous payperiod (since he was out of town, he couldn't add it in, so it got submitted late).  This brings his total overtime for the year to 66.75.  Unless something else "big" happens, that is likely the end of the OT (due to the federal budget sequestration).  There may be an hour or two over the next 6 months, but nothing big.

The interesting thing about this paycheck is when you look at the Gross Pay vs Net.  Once you take out taxes and deductions, we normally see about 51% of the gross pay as net.  But this one, we got 58.5%.  That gives me a clue that they didn't take out enough taxes (and trust me.....they take plenty!!!!)

It is really is pathetic that 1/3 of just the overtime pay went to taxes.  And it isn't enough.  *sigh*

As I mentioned, we planned on taking G-man's 3rd paycheck in April, plus his overtime pay, plus all sorts of little piles of money (including the money we had set aside from his cancelled guy weekend), and put it all together and see where we were at.  Admire the pile for a minute.  And then decide.

So, all the piles together.......come to just shy of $3000!!!  I have transferred the money from our main checking account to the "holding" account, so I don't have that nice number to look at yet.  Give it a few days.  Then I can just bask in the glory that is a big pile of money!

Now, you hard core, gazelle intense folks are going to say!  Yay Mysti!  Finish off your Baby Step 1 (which technically is done if you go off of Dave Ramsey's $1000 EF, and we are just shy of $2,000, not including my "just makes me feel safer" money).  The remainder should knock out the medical/dental bill, and then put a dent in CC4.  Right?  Oh you hard core folks.....you are so funny!!!!

No division decisions have been formally made other than:
The money from G-man's trip that didn't happen will also get put aside for the future trip (because it would have been spent if he had gone).

We have Discover Cash Back monies, My Points, and Swagbucks, so those will go towards Sassy's room.  Her carpet is trashed, and we are in the process of figuring out what that will run to replace.  Until we know some more concrete info, we can't really make an informed decision.  Worst case scenario is we rip out the carpet and leave her the hardwood (which is in OK shape, but not great).

But she needs a desk and dresser (hers has gotten too small for her clothes).  And no....I don't want to go on Craigslist.  That is where her current stuff came from.  We are looking at a Target desk and IKEA dresser.  Nothing fancy, but it is new and all hers.  And we will paint and just freshen things.

The fun....we found a sofa, loveseat, and chair set on clearance for $1000.  We have been debating this for a while.  Ultimately we decided that this house just won't accommodate what we really want, and since a new house isn't in the cards....we have to go with what will work.  We like the set enough that I don't think we will feel like we are settling.

And then the debt.  The dentist will get part....and there are some bills that aren't part of the big debt and part will go in that direction.

Or at least that is the current plan.  I am feeling like we are spending more of it than we should.  But I also feel like we will get more of a boost from doing it this way than we would if went gazelle.  Like I have said....we aren't gazelle.

And like I said....we are going to let the money sit for a bit just to make sure that we do what we want to do and that we have thought it out.  There was one thought of going on vacation....but I just know I wouldn't enjoy it at this stage of the debt process.  We also thought about not doing anything with it, and just letting it sit.  But that didn't seem right either.

I will let you know as updates happen!