G-man and I have been talking about collecting "something."  Something that we both like, that won't break the bank (yet!), and would be neat to seek out.  He wanted to collect skulls....while "cool" as they are....um, no.  We agreed on crystals!  Here are two we are thinking about as our virgin purchase.  The one on the right looks soft and fuzzy, but it isn't! 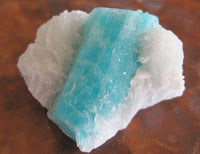 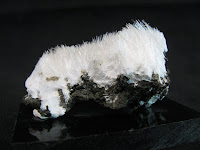 And on to the Chit Chat for the evening...


Reading: I am reading Red Mist by Patricia Cornwell.  I am not really feeling the reading love right now, so it is slow going.

Watching:  Bossy is beside himself giddy to watch Amazing Race, so that is definitely on the agenda.  After that, not sure.  I have a ton of stuff on my DVR, so I will have to see what strikes my fancy for the evening.

Listening to: When I started typing.....I was listening to the shower upstairs.  The kids are getting all clean and comfy for the start of Amazing Race (seriously, this has been THE topic of the day).  And the WIND.  Good golly it is windy out.  Also listening to a very soft kitty who is asleep on my lap.

By the time I was done typing....kitty was gone, Bubble Guppies was on, and I still heard the shower going (Sassy).


Cooking/Baking: G-man made dinner on Friday and Saturday.  I am trying to eat "lighter"; more salads, fish, etc.   But tonight, I made a pulled pork shoulder, corn pudding (for G-man, I hate the stuff), and mashed potatoes.  A few bites and I was done. The left over pork and corn pudding made 7 burritos for later on.

Happy you accomplished this week: Taxes!  Officially turned in and accepted and waiting for the refund.  Also happy that I was able to work from home 2 days this week and not lose the pay since the kids were home.

Looking forward to next week:  Open school night at the middle school for incoming families!  EEEK.  My kids are going to MIDDLE school.  But they are still my babies, right?


Thankful for today: Prescription refills!  I thought I had to go to the pharmacy, but when I looked again in the cabinet, I had one package of meds left.  So no refill needed for a few weeks.  I really didn't want to go out....


*BONUS QUESTION*
Have you ever received a gift you were less than thrilled with? Did you feel like you had to keep/use it in order to spare feelings from getting hurt?
I don't even know where to begin with the number of gifts I have gotten that I was less than thrilled with.  We got "duck" dolls as a wedding gift....a groom and a "bride" but the bride was in a purple satin dress.  Similar to this:

Or my birthday that I got these lovelies (found the pic on ebay):

In these cases....they never made it out of the boxes beyond the initial look.

I have also gotten a Precious Moments cross (I am not Christian), regifted Walmart stuff, casserole dishes, a sweater that belongs in an ugly sweater contest.  I can go on and on.....but NO...I didn't use this stuff just to be polite.  With the exception of the casserole dishes, I packed the gifts away, or eventually gave it to Goodwill.


Thanks to Carla for hosting!!
Posted by Mysti at 7:12 PM