We survived.  Can I just tell ya....there were a few moments in there where I wasn't so sure.  But we are alive.  I had a massive melt down the night before.  My anxiety level was really high.  We had marital counseling earlier in the day, it was a rough go.  The boxes and the clutter all around me at home...I was a mess.  My friend stopped by while out on a walk to find me huddled on the couch.

This was the mess around me at the time (sorry they are dark again...I stink at photography using my phone): 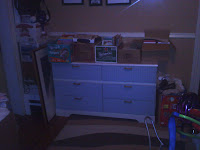 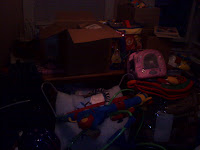 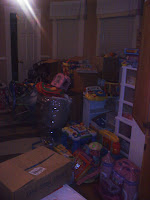 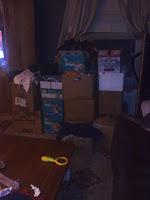 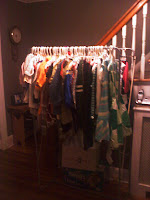 We left ourselves 3 hours to set up, which was just about right.  We had a few earlybirds, which was fine.  We were amazed at how much STUFF we had in general.  Some it looked like more than we thought....some of it I thought looked sparse.  But it was what it was. We ran the sale from 9am-3pm, but no one showed up after 1:30pm.  It took us about 2 hrs to take everything down, and by 5pm, we were wiped out.

Here is what it all looked like set up: 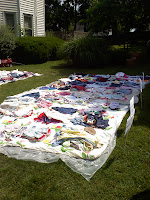 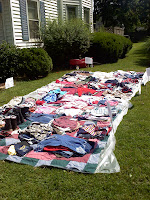 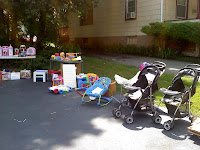 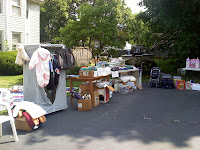 I think we priced things well, as most people just paid what the sticker said.  We had a few hagglers, which I expected.  Then there was the one lady who must have picked up 25 items of clothes, and offered me $5 (we were asking $1 an item).  She wouldn't go above $10...fine, whatever lady...just go away.


So...how did we do?  We didn't sell as many clothes as I thought.  We had tons of pregnant ladies, and I was sure that we would get rid of stuff...but some things were never even touched.  We did sell several larger items to our neighbor.  Kids books went well.  Home decor was not a big hit.

We are sooooo proud of Sassy.  She was up at 5:30am to help us, and worked her little tail off.  She hauled boxes, ran and got things for us.  She entertained little kids while their mom and dad shopped.  She had her bottled water station, and stayed outside with us for the entire day.  Her water station didn't do very well.   Only sold 2 bottles all day.  :( We felt she deserved more than just $2 for all her efforts, so we added $20 to her profit.

Bossy mostly stayed inside for the day.  But he was so well behaved.  He did come out from time to time, but he largely kept to himself and just let us do what we needed to do.

Unfortunately, we ended up putting things back in the attic for the moment until we can permanently get rid of them.  So no pics of the attic yet!!! I think I am going to bring the clothes and try and consign the nicer ones.  The rest will probably get donated.  Toys...don't know yet.

Would I do it again....probably.  But I think I would rather do 2 smaller sales than 1 large.  Especially with the clothes!!  We decided that the profits will go towards debt (although part of us is thinking of putting it toward the carpet in Bossy's room).

Thanks for all your well wishes!
Posted by Mysti at 8:57 AM