So, I started this post a few days ago, and while writing it, a few things came to light and I decided to delve deeper.

As of right now, we have paid off $1,004.95 of our debt! This number is going to probably change once some finance charge hit, dragging it closer to $900. My first reaction was WOOO HOOO! PROGRESS!!

Then it hit me....how much did we spend to get to this point? This is our total debt....I know we have paid more than $1000....why did it take almost 6 months to pay off a grand. Enter my goal to track better. So being the geek that I am, I did a spending analysis.

In this exercise, I focused on just the credit cards. For my purposes, I took CC statements Aug 2009-January 2010 for this exercise (the only exception is that I don't have the January statement for one bill, so I just took the purchases and payments...not the finance charges). They each have slightly different closing dates, so these aren't "exact" by month...just by statement.

I thought we really had stopped using our credit cards. I know I dipped into one card a bit at the holidays. My bad. But seriously....how did charge $3,100?(wait...I will tell you!) Of the amount purchased...G-man was responsible for 68.6%, and I did the remaining 31.4%. I didn't think I had charged that much. Really didn't realize he did either.

I looked at the spending and made this little chart: 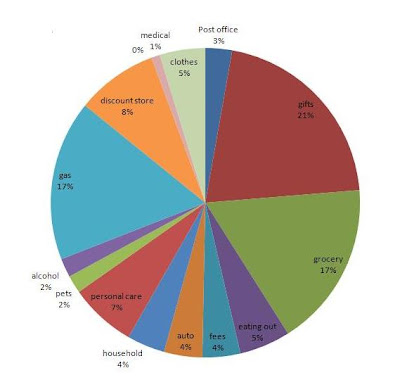 Turns out that 21% of the purchases were gifts (which includes a wedding, kids' birthday, G-man's birthday, and Christmas).  Just over 1/3 was gas and groceries.

And the scariest number of all....$34.98.  Wanna know what that is????  That is the actual amount we paid toward CREDIT CARD DEBT.  Yes....if you add up our purchases and finance charges.....and subtract them from the total paid....you get this sad little number.  In 6 months, we managed to pay $35.

I am more than disgusted with us.  This exercise has been a HUGE jolt.  G-man and I have another talk coming up, and this is going to be at the center of it.  Gifts....we both blew it.  Groceries and Gas....that was mostly him not using our checking account.  Stuff I can't account for....that is bad.

So my celebration of repayment was very short lived.  This is not good.  But at least I know now and can move forward.
Posted by Mysti at 1:57 PM