What a week!!!!  I know that things are crazy over at Carla's place as well, but make sure you say howdy to her. She has a sick kiddo again! 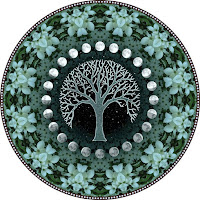 I am in love with this picture.  I love mandalas.  This one honors the Winter Solstice...I sent the artist a note to see if he will have a summer solstice one!  If so.....they are so going on my wish list!

ETA:  Just heard from the artist, and no, he doesn't have a summer piece, but thought it was a good idea and would consider it for the future.


Reading: Nada.  Not even my magazines.  I am too busy to sit and read!

Watching: I miss all my regular shows.  Summer shows are ok...tonight is the return of Army Wives and the season finale of Sister Wives (ok...so I have read a few other blogs tonight, and apparently we all watch this show!  I love it.  I think they are a terrific family.)

Listening to: Of course, Family Game Night.  But also the sounds of children fighting in the bathroom over the shower.  I give up.


Cooking/Baking: Nothing.  We have been grazing on whatever we have.  The crazy week messed up the cooking schedule.  G-man made sauce the other night, so we have been eating whatever (last night was meatball subs, tonight will just be pasta).  But pork loin is on sale this week, so I will be stocking up, and probably making a big ole batch of Green Chili.


Happy you accomplished today: Found baskets for Bossy's stuffed animals!!!  Got his new fish tank set up.  And in addition to several hours of errands, a few hours at the office, and some bill paying...I have laundry going.

Looking forward to next week: There isn't anything "extra" on the schedule!!!!  Catch-up week....and boy do I need it.


Thankful for today: My husband's overtime.  It is allowing us to do a few extra things, AND pay off debt.  He has worked so hard in the past 3 months (41 overtime hours, in addition to his usual 60 hrs a week!!).