Moving to the south has brought forth new critters into our lives...or at least in the past few days.  Lizards.

Lizard #1 was seen on our back deck, scaling the privacy wall.  He (I have no idea about these things, but let's just call it a HE) darted in and out of the planks.  He sunned himself both on the top of the wall and the side.  He has a red throat, although I wasn't able to capture that on film.  He provided entertainment for a while.

Sorry for the blur on the photos...they were shot through the window screen. 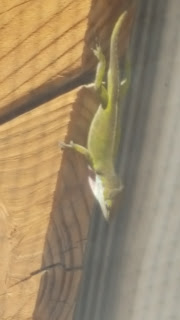 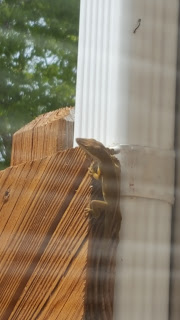 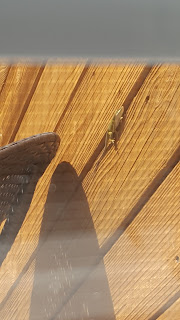 Lizard #2 was in my foyer!  Um, no idea how he got inside the house, but I was less than thrilled.  The master bedroom in on the first floor (living space is 2nd floor, and kids' room and office are 3rd), and as I went downstairs to retrieve something....there he was.  And there was a cat who was watching him.  No thank you.  I don't need kitty deciding to bring me a present or leaving it on my bed or a zillion other icky ideas. 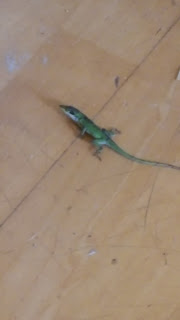 I found an old container, and I had Bossy put it over him (he loves this kind of stuff).  We had a repair guy coming over (more on this another time) and I figured I would ask him to take care of it for me.  Yeah, I was invoking my "girl" card....if you are a girl who likes this stuff, more power to ya!  Meanwhile, my cats spent the day either watching this thing, or occasionally batting at it.

The repair guy was 3 hours late, so the lizard was contained longer than I had planned.  And the guy sort of "reprimanded" me for it....whatever, dude.  But he did remove the critter, who dropped its tail when he was picked up (and the tail was still all squirmy and icky!!).

We have a warming trend going in the coming weeks.  Per my weather app, it will be sunny and 86 today and 90 tomorrow.  In the coming weeks, most days are in the 80s (of course, this is all subject to change).  No idea if the warmer weather will bring more critters.