On to the outside!

We have owned this house for 10 years, and the decor out here has been modified many times.  It just never is quite right.  We started out with just Wreaths on the windows (and still have those wreaths 10 years later).  We had icicle lights for years until G-man decided he couldn't deal with them anymore.  We have had snowmen.  We have had snowflakes.  The last 2 years we added some garland, and were getting closer to the look we wanted.  Then I found an inspiration picture!  Thank you Pintrest! 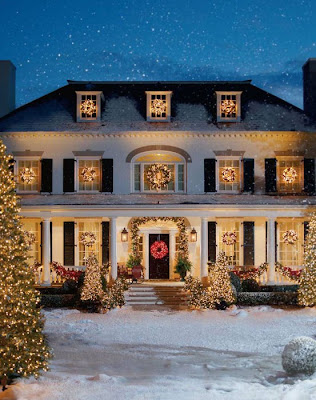 Our house isn't that big, and there are elements that we didn't include this year due to budget.  But we tried.  Here is the end result: 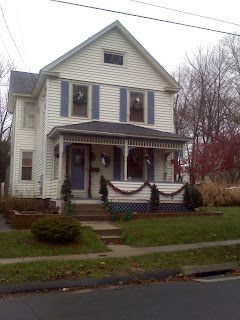 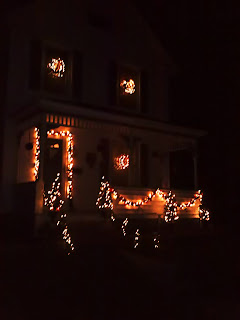 I tried to get a decent picture in the evening.  But it failed miserably. Part of the problem is the lack of light.  Plus, I stink at this.  So here is what stuff looks like up close.


Here is the front of the house.  The garland we already had and I added Dollar Store Ribbon and Poinsettia.  We also already had the lights.  The trees are new.  You can't really see it, but there is garland and red sparkly ornaments on the base to fill in the space between the urn and the tree. 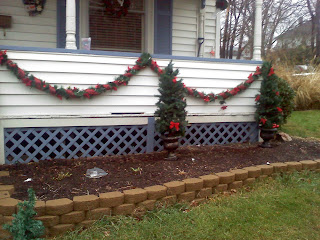 Our Walkway trees need more lights for sure.  The 2 on the steps need bigger pots.  Since we can't stake those, we tried to put them in a container.


But this is what happened because the pots weren't big enough: 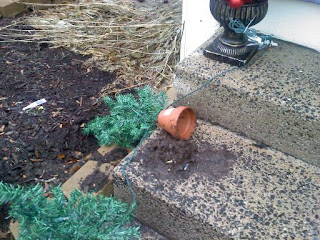 The wreaths are old, but they look better with the lights and ribbon. The upper level didn't get ribbon on them.  I have it...but it just didn't get done.  I let it go. 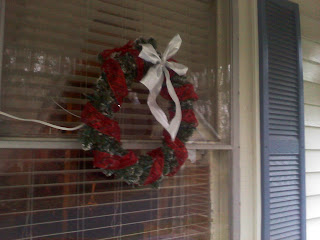 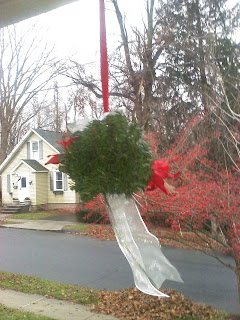 We had the Kissing balls.  We got those last year.
The front door came out nice, I think. 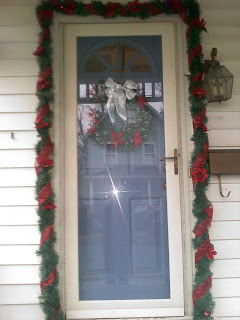 My poor pictures really don't do it justice.  It is much nicer in person.  Next year we would like to add more lights.  Probably something in the ceiling of the porch.  A wreath on the top window  (which is actually the attic).