At a loss at what to write today....I garnered inspiration from Niki at Debt Free by Thirty....who stole the idea from Minting Nickel......I guess PF blogs just borrow ideas.  Who need original thought....  Here is a borrowed picture of my first car....but in way better shape than my actual car. 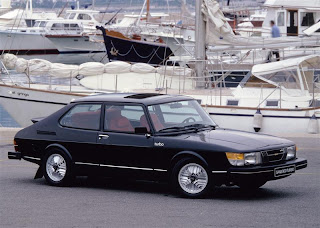 It was the summer between my Freshman and Sophomore years of college.  I had been looking for a car that was 1) cheap, 2) cute, and 3) cheap.....oh wait...I already said that.  Back in those days....the internet was barely an embryo.  We had to LOOK IN THE NEWSPAPER.  The horror!!!

Then I had to learn to DRIVE the car.  Dad and I went to the community college parking lot (a rite of passage...everyone learned to drive in this parking lot).  Those first few tries were rough.  Anyone who drives a stick will tell ya that there is a learning curve.  Gas, clutch....it is a dance.  Once you know how to do it, it is fine.  But you better be prepared to stall the car....alot....while you are learning.

Once I got the basics...we went looking for hills.  Another obstacle in driving a stick....starting on a hill.  And I can proudly say that I learned without using my emergency brake.  I can get up some REALLY steep hills.  Then Dad threw me to the wolves and made me drive home in rush hour traffic, on a major road.  I stalled the car at a stop light, and the cars were honking at me, and I panicked and, and, and....I cried.  We finally got home, and I cried to my mom that Dad was mean, and made me drive the car, and I wasn't ready and, and, and WAH!  Mom gave Dad the hairy eyeball.

But eventually I got it....and I was rolling!  Now, I found out the idiosyncrasies of the car.  Like, while I thought it was fine that the car didn't have A/C, it really wasn't fine when it was 95 degrees out and I was sitting in traffic.  Nothing like a big sweat stain on the seat of your car.

Speaking of the seat...shortly after I bought it, the springs in the seat gave out.  My butt hit the floor.  I looked like a little ole blue hair who could barely see over the steering wheel.  I had to stuff old pillows under the seat to prop it up.  Nice....

The radio...it was ancient, by 1993 standards.  So I bought a new one...that didn't quite fit.  So it sort of stuck out. The sunroof stuck.  Not good when it started raining.  Once you got it closed...it leaked....just a little.

Slowly but surely, this and that started to go.  The kiss of death was when I was driving to work, and when I stepped on the brake, this oily liquid came gushing out all over my feet.  I later found out that was brake fluid, and it was my master cylinder that just went.

I got about 2 years from that car.  It drove me around for late night Taco Bell runs and Dunkin Donut runs.  My boyfriend and I would leave campus, just because we could.  I took that car on a few road trips, and it saw it's share of *action*....cough cough (did I mention I was 18 and in college and had a boyfriend????)

I sometimes miss my car.  I loved driving a stick shift.  I loved the freedom. My minivan just doesn't have the same pull as that first car.  But we all had to start somewhere, right?

ETA:  In discussing this with G-man, I realized my car is a 2000....which means that some 18 year old MAY be buying the same year car as I am driving as a 36 yr old.  I am twice their age and driving the same car!!!  Interesting how it all comes full circle.
Posted by Mysti at 9:04 AM