Today's entry is brought to you by the letter "C" 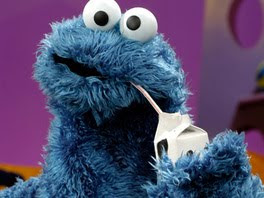 Funny thing about kids with Autism....they get stuck at a stage and it is hard to get them to graduate.  At almost 8 years old, Bossy has discovered Sesame Street.  We watch alot of Sesame Street......*sigh*

Credit Cards - It was nice paying off CC1 with the Lending Club loan.  Now, I am not naive.  The debt isn't gone....it is just called something else now.  But at least I am not a slave to the interest rate now.  I set up an ING account to put that money aside...unfortunately the monthly payment cannot be debitted from there, so it is a bit of back and forth, but that is ok with me.

Cutting Ties - My smaller student loan is the LAST of the loans that is in my father's name from my undergraduate degree.  We are working hard to knock that one out in the next 2 months and that will officially cut the very last string that financially binds me to my parents.  Even though I have been married for 12 years, and out on my own for 15, that little tiny thing still tied me up.  Almost gone!  Once that is gone, then we are snowballing by interest rate on the credit cards.

Christmas - did you know we are at just over 4 months until Christmas???  No panicking.  You still have time....but you better get saving!!!

So, I have these CC points.  Now, I can't even tell you how many have expired over the years.  A sick amount.  The original thought was saving them for airline tickets....but since that trip is not coming anytime soon....forget that.  Then we were going to get this camera....and then my parents got us a different one as a gift.  After much thought...we decided.....

that Santa will be bringing a Wii for wee people (hee hee...I said Wii wee).   We were able to get a Wii console, extra motion plus remote, and recharging station, and still have some points left over.  Plus...free shipping!

We have also decided that the kids will be getting more "practical" gifts from us this year.  They are each getting a hand painted by Mommy cereal bowl (from my favorite paint your own pottery place....I get a girls night out, and tackle a gift too!), some decor for their rooms, and mix CDs of their favorite tunes that they listen to in the car with us (which is actually KISS, Lady Gaga, Train, Bon Jovi, and other 80's hair metal).  We already have these songs on our MP3 players, so it is just a matter of burning the CDs for them.

Camp - The kids love camp.  We love sending them to camp.  And for less than $1000 for 7 weeks of camp, 5 days a week, for 2 kids....it is a good deal.  Mother in Law ultimately paid for Camp this year.  We weren't expecting that when she said she wanted to help.  But we also don't expect this to be a yearly thing either.  So, I opened another ING account to start saving for Camp for NEXT year.

If a grandparent decides they want to help us out in this area, then so be it.  Mother in Law in particular feels guilty that she buys more for the other kids than ours, so she tends to do infrequent BIGGER things.  If she doesn't, at least we will have the money ready to go.  If she does, the money we have saved will be a nice fat payment towards debt.  Camp is roughly $1000, so we aren't talking chump change.

Closure - This will actually be a separate post next week, but wanted to mention it since it falls under the "c" category.  We have been saving up for something, and with a surprise bonus today for G-man, we are able to purchase our items.  This has been 3 years in the making, and it is a HUGE emotional victory for us.
Posted by Mysti at 11:12 AM